This form and app builder hits the spot – especially in the energy industry. And the nice thing is that employees really love it. 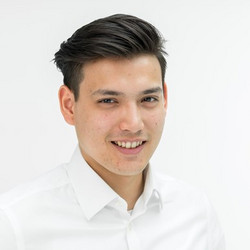 Apps for a modern electricity and gas network

Avacon Netz GmbH (part of Avacon AG and E.ON SE) provides innovative energy supply technologies for around 16 million people in the regions of Lower Saxony, Saxony-Anhalt, Hesse and North Rhine-Westphalia. The modern electricity and gas network of the major grid operator could span the globe more than twice with the length of its network. For the new construction, maintenance, repair and modernisation of its networks, as well as for new business areas such as energy solutions, Avacon needs highly qualified employees and the ability to respond quickly. Our green future demands a high level of resource conservation, efficiency and cost-effectiveness. A digital transformation with all its benefits is therefore essential for the next step in the energy revolution.

What is the specific challenge?

Aaron Schrader (Digital Transformation Manager at Avacon) tells us that, in the area of digitisation, attempts are often made to tackle the really big issues. Although this occurs with an agile way of working, the pain point in relation to the digital maturity of a distribution grid operator also lies in the everyday work processes of employees. But how can an acceptance of new technologies be created among staff? Schrader is certain about this point: digital acceptance only comes about through direct added value for colleagues. So it's all about finding pragmatic solutions for everyday work – and that's where smapOne comes in.

Regional technicians, for example, work on a mobile basis and do not have the opportunity to use digital documentation in all use cases. What's more, other topics, such as the installation of powerline communication components (PLC) in the network area, are added to the activity profile as new documentation work. Often, employees have no other option but to catch up on updating data in the office on Friday. In addition to the time difference of up to four days between execution and entry, there are also seasonal challenges. During site inspections in winter, notepads can be smeared and photo documentation with a digital camera represents a media break with additional follow-up work.

Another example is the disposal documentation for hazardous waste from construction sites. Approximately 4,000 forms are filled out annually for this process. Three departments are involved here, and there are always additional costs due to omissions and the duplication of work.

What does the individual solution for the pilot phase look like?

The partnership between Avacon and smapOne started with a so-called proof of concept (PoC). During this pilot, several use cases using 10 forms were tested in three functional areas.

For the PLC installation in local transformer substations (powerline communication modules), the technicians record the serial numbers of routers and the work steps performed using an app. The result is a structured data record that the company can use as the basis for many other digital developments (keyword: software robotics).

Another area of application is waste management services. Hazardous waste is usually generated during the repair and construction of new plants. Legal requirements demand extensive documentation in this area. Add to this the fact that a total of 30 different forms are now being harmonised in one app. With a reduction in paper usage, duplicate work and default costs, a good ROI (return on investment) can be expected quickly.

For planning and site inspections, Avacon uses its own app solution, primarily for a professional appearance and for branding.

Tablets were purchased to use the app for the test period and also for productive operation, but the smapOne solution is also being actively used via mobile phones.

What has changed so far?

"Our employees think it's really great," says Schrader enthusiastically during the interview. "Often, apps only require a handful of different building blocks. This sounds trivial at first, but it makes the job easier and faster straight away and reduces the work and burden of users."

These "users", whom Schrader sees as the secret jury of the flagship project, are a company's most important asset these days. The app solution massively reduces the pressue on technicians, for example when installing PLC elements. They no longer have to document their work using various hardware devices like digital cameras, notepads, etc. in their home or at the office. Instead they can work completely digitally on site, saving time and increasing security. In many areas of activity, Avacon also gains in professionalism and increases many other "soft factors".

How does integration work?

At the start of the partnership during the test phase, Avacon was supported by smapOne experts through workshops. The company is now training its employees itself – with an amazing learning curve. Employees recognise situations themselves and want to turn them into apps. They welcome the new opportunity to provide solutions themselves and speed up their processes. Examples include mobile applications for site inspections and fault checklists, as well as "cable drum release". Previously a cumbersome process with slips of paper and sequences of numbers, the error rate was considerable. Now an app with a barcode scanner enables simple, error-free handling. Schrader goes on to say that Avacon definitely wants to take advantage of smapOne, with as many app solutions as needed. "In the backlog, we currently have over 25 further use cases and deployment scenarios." Most are still being prototyped in the pilot project and tested in live operations, lasting six months. From simple inspection records and site inspections to professional documentation for customers and material orders – the potential for an extensive grid operator like Avacon is gigantic.

With knowledge of functions, possibilities and the scope of use, the pilot phase is followed by the operational phase, for which a structured, orderly procedure for scaling is developed together. We at smapOne are already excited about this productive best practice example.

PreviousNext
About the company

Avacon Netz GmbH (belonging to E.ON SE) provides innovative energy supply technologies for around 16 million people in the regions of Lower Saxony, Saxony-Anhalt, Hesse and North Rhine-Westphalia. The modern and sustainable electricity and gas network of the large grid operator extends over thousands of kilometres in length.

Lukas and Lea work at BSH, a German manufacturer for photovoltaic solar power systems. Neither are programming experts. Yet thanks to smapOne's no-code tool, they build their own business apps for the company. Altogether they have digitised almost ten processes in a short amount of time. While closely cooperating with everyone, they are promoting the courage to digitise throughout the company.

wpd windmanager: service recording in the wind farm in half the time

Germany's No. 1 in wind farm management now relies on apps for the documentation of inspections, tests or measurements! This means that the company saves 50% of their time, makes life easier for employees and generally has better quality data to work with.

Want to be successful too?

Let’s create your success story together!

Get a free 14-day trial today.